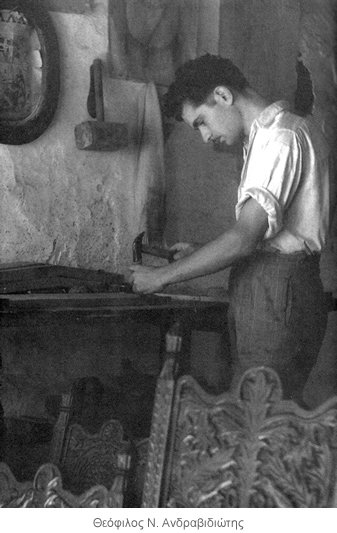 With the art of woodcarving first dealt Adravidiotis Nicholas (1896-1954), who relying solely on his natural talent for dealing with this art, he managed to become a leading teacher of woodcarving. He created unique works of ecclesiastical art, often praised by Greek and European critics.

Worthy descendants and successors of the great artist are Nicholas' sons, Theophilus and John, who have studied at the side of their father, a great successor of the Byzantine tradition.

Theophilus was born in Zakynthos in 1930 and from a very early age began to take drawing and wood carving lessons by his father, together with his brother John. Later he came in Athens, where a few years later came and settled the whole family.

With their wood carvings Theophilus and John has graced numerous temples in Greece and abroad, such as the Temple and other woodwork in the church of St Constantine in Hydra, the Monastery of St. Panteleimon in Penteli, and Almighty church in Zante.

Their works of art are also located in Pretoria, Port Elizabeth and Cape Town, Africa, Madrid, London, Korea, the Church of the World Council of Churches in Geneva, in the United States of America and in Australia.

The two brothers have worked for approximately thirty-six Temples, eight restorations of Temples and for one hundred and fifty other churches,  woodcut ecclesiastical items (shrines, despotic thrones, lecterns, pews, candle stands, jewelry cases, pulpits, etc.) in Greece and abroad, Zurich, Seoul, London, Cape Town, Johannesburg, Pretoria, Finland, Madrid, Hanover, Bethesda - U.S., Pontiac Michigan, Minnesota - Minneapolis.  It's worth mentioning their cooperation with public institutions and the Ministry of Culture specifically, with the Historical Archive and the Ecclesiastical Museum of Hydra, the Holy Fathers' Museum of Corfu and the Room of paintings in Tinos.

Today the great family tradition in woodcarving is continued by Theophilus' children; Eleftherios and John, who walking the path of their father and grandfather have undertaken the creative and faithful reproduction of the great Byzantine Art and the in Third Millennium.